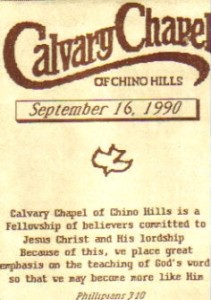 Each week the furniture in their home would be moved out to make way for more chairs and more people. From the very beginning, the Lord blessed the fellowship with slow but steady growth.

Video lines were run through the house which allowed the growing number of adults to watch the service that was underway in the living room while they sat in other rooms of the house!

A short time later, the church began to meet publicly in a rented industrial complex in Chino. There, the church grew radically from about one hundred adults to a little over two thousand, not counting the youth and children.

In 2000, the property upon which the church now stands was purchased. Since completion, it has about five thousand adults in attendance on Sundays, not including teens and children. We thank the Lord for His faithfulness and favor. We are humbled by what He has done. His grace toward us in all these things is just one more indicator that He wants to do so much more.

Will you join us as we follow Him together? The future is always exciting and certain with the Lord!